5 THINGS TO DO IN BUDAPEST

The beautiful city of Budapest, capital of Hungary, is one of the largest cities in Europe and straddles the Danube River (originally Buda was on one bank and Pest on the other). It is often the jumping off point for a river cruise or the end point of one. It is recommended you add a pre- or post stay to your river cruise to enjoy its various highlights. It can not be appreciated in one day, or even two!

Most places of interest are within walking distance of each other and bicycles are available to rent as well to cover more of the city if you are not participating on a guided tour. If you are not physically inclined for active walking or biking and wish to shun the cost of taxis, the city is well covered with buses, trams and metro lines. There is even an English language website for line and fare information. Generally,those over 65 travel free of charge on public transport. 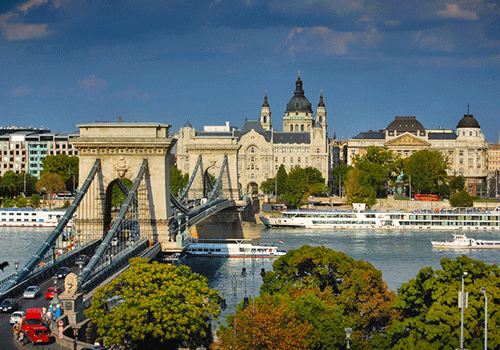 Budapest straddles the Danube, and river cruise ships are a common sight. (Canstock)

What to see or do? Here are a few suggestions:

There are of course many more things to do and see in Budapest including a vibrant night life and fine dining – all what one would expect in the “Paris of the East”!

Contact your trusted travel professional about a river cruise including the stunning city of Budapest. He or she has knowledge of many available river cruise lines to suit you and can arrange all the peripheral details such as flights, transfers, and hotels to ensure you have a stress-free vacation. See also the article on “Count Dracula’s” Castle should you wish to explore further afield.