San Juan, Puerto Rico is a popular cruise port, not just as a port of call but also as an embarkation port too. It is the busiest cruise port outside of Miami in North America. Many cruise lines sail from here: luxury ones such as Windstar, Silversea, Azamara and Viking Ocean; the premium line Celebrity Cruises sails from here; and the contemporary lines, such as Norwegian, Royal Caribbean and Carnival sail from this port too. Even Disney utilizes this port for some voyages. Choice is not an issue!

Itineraries too can vary from specialized, not your-run-of-the mill ones usually offered by the smaller luxury ships, to a transatlantic, or a northbound (usually a New Jersey disembarkation), and of course, to the islands of the eastern and southern Caribbean, which the focus of this article. 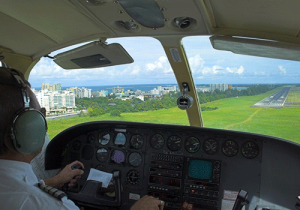 Landing in San Juan by air

States? If the islands stretching to the south of Puerto Rico or those just off the northern coast of South America such as Aruba or Curacao are your preferred part of the Caribbean to visit on your cruise, sailing from San Juan can cut days off an itinerary that sails from Miami or Fort Lauderdale. If you have only a week or so to spare for your journey, chances are you wouldn’t get too much further south than San Juan or St Thomas on most 7 night cruises from Florida. Sailing from Puerto Rico gives you a head start to the southern Caribbean.

Most likely you may have to fly to your departing cruise port anyway, so flying a little further to San Juan should be no big deal, either in time or money. Plus, when you get there, at least a day early is the recommended strategy for any cruise, you have a whole new city to explore. And if you do have the time, it makes sense to add on a pre-cruise stay of a few days to explore this lovely island. 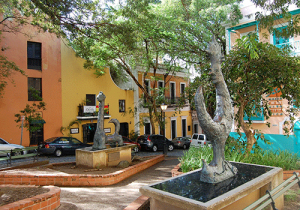 Puerto Rico may have a Spanish history but it is now a territory of the United States. San Juan, the capital, is a bustling city port but retains its charm and character befitting the second oldest city in North America. Founded in 1592 by explorer Ponce de Leon, it still has its many old buildings and the forts used to defend the colony in the many wars fought with the English, Dutch, Germans (World War II), and yes, even pirates! This city was rarely defeated in battle. It even spurned Francis Drake!

A visit to the historic quarter of the city is a must, also to the San Juan National Historic Site (a UNESCO World Heritage Site) which encompasses both San Felipe del Morro and San Cristobal, two famous forts. The view from the latter is spectacular. And Puerto Rico is not all history and shipping, it also has fabulous beaches which are well worth visiting.

So, if you are contemplating a Southern Caribbean cruise and your vacation time is limited – or you have visited the islands north of St Thomas numerous times – consider reserving on a cruise that departs out of San Juan. You have many choices in cruise lines from the less expensive to the luxury lines just as you would from the continent. Your travel professional can help you find your preferred ship and itinerary to explore the southern Caribbean Sea.

Photos courtesy of Bigstock and Pixabay.