Skip to content
Guernsey | White Houses, Witches, and the War

If you have ever read the novel, The Guernsey Literary and Potato Peel Pie Society by Mary Anne Schaffer and Annie Barrows, you will be intrigued by this delightful book and by the thought of visiting its setting, Guernsey. Guernsey is the second largest of the Channel Islands lying off the coast of France in the Bay of St. Malo but remarkably British, and British for a very long time, ever since it became part of the Duchy of Normandy and later governed by William the Conqueror. Yes, that William of 1066 Battle of Hastings fame, so it’s been loyal to Britain for a very long time. Needless to say history abounds in this place.

Due to its much warmer climate, the island receives many visitors from Britain each year and tourism has been one of the traditional mainstays of the economy (besides dairy, horticulture and fishing) since the 1800’s. If you are lucky enough to catch one of those ocean cruises that pride themselves on non run-of-the-mill itineraries, you might find yourself in St. Peter Port, the capital, on a Mediterranean or a transitioning cruise. Carry the British pound to spend in the quaint boutiques lining the cobble stone streets but try not to collect too much Guernsey currency in return as it will only be accepted on the island. Guernsey also sports its own postage (be sure to send a post card or two!), and its own parliament as, although it is loyal to the British Crown, it is independent of Britain. 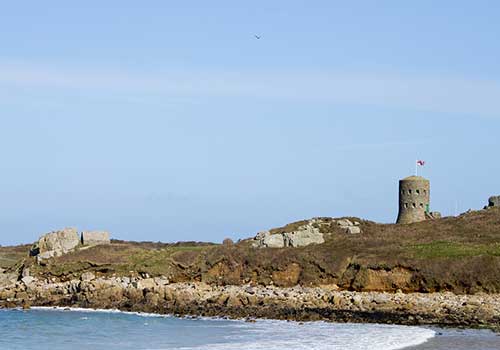 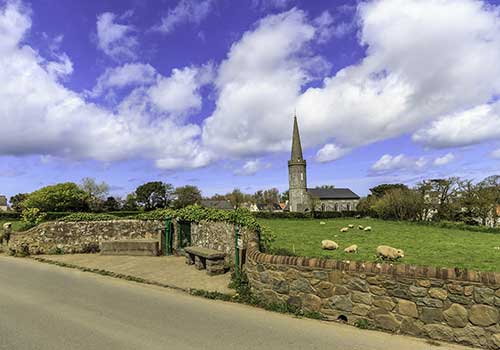 St Peter Port is a bustling seaport, and like many ports displays colorful houses along the waterfront. Though most of the buildings and houses of the town are white (or grey stone), vibrant color abounds with flowers. The warmer weather encourages all sorts of flower displays, public and private, which greet you round every turn in the street – and some streets are quite narrow, winding and steep due to the town’s age and typography. Needless to say, wear good walking shoes on your explorations otherwise you might miss all the beauty and history on display.

On your meanders about, watch for the Barriere Stones marking the boundaries of the old town, and for the protective measures instigated against witchcraft – circles burnt into wooden doors of homes as talismans against the evils of sorcery. If you climb down to the bottom of Tower Hill, you will be in the area where nearly four dozen people were strangled and burned as witches or warlocks in the 17th century. 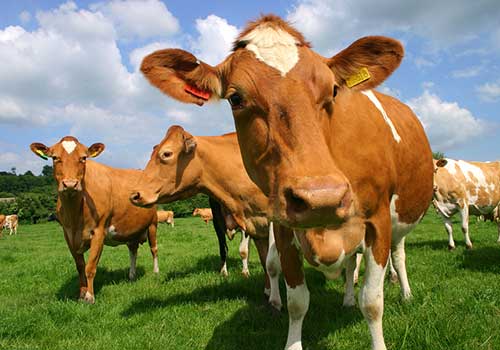 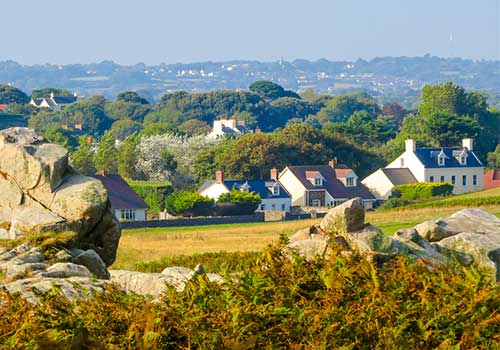 Be sure to visit Victor Hugo’s home, Hauteville House, the Candie Gardens, and the Castle Cornet which dominates the approaches to the town from the sea. As well there are many museums concerned with the last war, including La Valette Underground Military Museum, the German Military Hospital and the Pleinmont Observation Tower, all reminders of the Nazi years. Guernsey celebrates Liberation Day on May 9th, the date it was liberated after five long and starving years of occupation.

Which brings us back to the subject of Schaffer and Barrows’ novel. But do not think Guernsey some grim and bitter place, lost in its past. It abounds with color and life. After your meanders up and down the town’s streets, you may just wish to relax in an outdoor café, look over the blue waters of the bay to the distant horizon, and bask in sunshine and warmth like the locals do while sipping on a cup of very British tea – with Guernsey cream of course!