Who wants to visit Peru? After hearing about this country of contrasts, it has climbed way up my bucket list of places to explore. (Be sure to check out a review of Peru from Sept 2021 as well.)

I knew Peru was located in South America on the Pacific Ocean, wedged between Ecuador and Colombia to the north, Brazil to the east, and Bolivia and Chile to the south, but to be quite honest I knew not much else, except Machu Picchu and Lake Titicaca were there. ( The latter gleaned from grade school geography – which is now “ancient history”.) What I now know about this fascinating country is that it is an enticing destination: history, adventure, culture, diversity in climate, and luxury on tap if one desires. The following is just an appetizer to a banquet of things to see and do in Peru.

The History in the Architecture

From modern high rises in Lima to the adobe of Chan Chan in the north, you can travel through time via the style of the buildings you encounter: ancient fortress cities like Sacsayhuaman and Machu Picchu, the reed “towns” of the Uros Islands, and the colonial Spanish style of Puno.

Machu Picchu was named a UNESCO World Heritage site in 1983. It was built by the Incas in the 1400’s but abandoned 100 years later, no one is absolutely sure why as the Spaniards never found it to sack and destroy. It’s perched high, all 8000 feet above sea level, on a mountain plateau . One can travel there by domed train and bus, or follow the Incan Trail on foot. (Flights over or to the site are banned.) One marvels at how it was built so isolated, so elevated, so long ago, and with such precision: the buildings are made with dry stone walls. The Incas mastered the art of building in such a way as to minimize the effects of earthquakes.

In the same general area (Sacred Valley) is the ruin of Sacsayhuaman. If the construction at Machu Picchu astounds, then this will amaze. Some of the blocks are 30 feet high and weigh as much as three tons. The stone used to make the blocks was transported from fifty miles distant, and over very rough terrain. As there was no mortar used, these blocks were fit together so tightly that you would be hard pressed to wedge anything between. This ruin is the remains of another Incan stronghold.

Travel north to the city of Chan Chan built by the Chimu civilization in the ninth century. This was the largest mud constructed city in the world holding up to 30,000 inhabitants in its heyday. The Chimu were defeated by the Incas not long before the Incas themselves were defeated by the Spaniards. Parts are being restored but it is a constant struggle against the harsh desert environment to maintain the buildings.

At Lake Titicaca, one must visit the Uros Islands built by peoples of the same name as a way to avoid taxes levied by the Incan Empire. Ingenious platforms built of a mud and reed foundation,covered with meters of reeds, and anchored to the lake bottom became islands in the huge lake ( 8300 square meters)  upon which homes were built and are inhabited to this day. Some islands are so huge as to hold six or seven homes,a school,or a medical centre. Wind storms loosen anchorage from time to time and an island with homes drifts to the nearest shore but, no problem:  the island is hauled by boat and re-anchored back out in the lake. 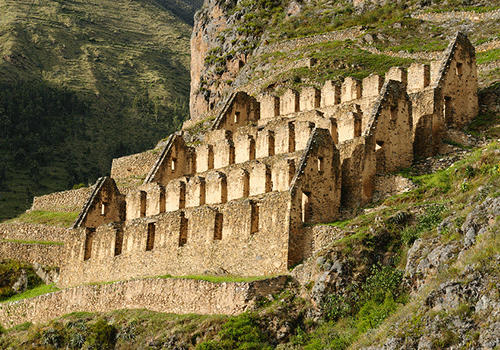 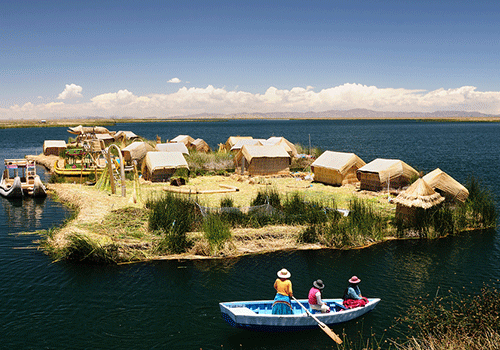 Who hasn’t read books or seen documentaries about the mysterious Nazca lines of southern Peru? The hundreds of huge geoglyphs of animals and geometric shapes are only fully appreciated from the air (though they can be seen from adjacent higher ground ) and beg the question of why? What was their original purpose? There are many theories but no conclusive answer. One marvels at the fact they were constructed 16 centuries ago and have survived all this time. The climate here with the almost total absence of rainfall (contrast that to the steamy Amazonian jungle to the the northeast) is the answer.

And with Machu Picchu and Sacsayhuaman ,the building mastery of the Incas is yet another mystery. Add to that, their knowledge of the heavens in orienting some of their religious structures is mind boggling to most of us even in this day.

With a topography that spans beaches by the sea, sandy deserts, high mountain plains, Amazonian jungle,the world’s highest navigable lake and its deepest canyon, and a range of rugged mountains, the variety of flora and fauna is astounding. Do you wish to experience the gentleness of the llama or the danger ( and beauty) of the jungle with deadly snakes, jaguars and pirhanas ? – It’s your choice. It is all contained in this one country. 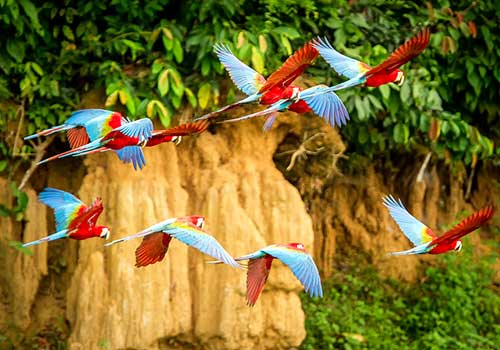 Macaws in the Amazon (Image: Bigstock) 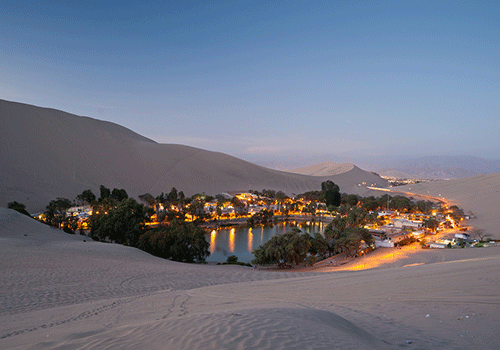 The Handcrafts and the Color

The multi hued dress of the Uros is reminiscent of the tropical birds found in the north east.  Handicrafts of textiles and pottery in local Peruvian markets become a shopper’s paradise. 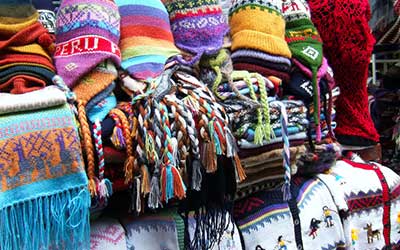 Want the ocean? Stay at a beach resort.

Want to stay in an urban environment midst all the hustle and bustle? Try Lima.

Peru can be many vacations in one or you can return multiple times to really immerse yourself in a particular area.  A great option is an add-on cruise to the Galapopos Islands owned by Ecuador. And many tour companies offer great in-depth guided tours of the region.

I have one reservation about praising Peru. This country has so much to offer and to date, from what I have read, the government appears to be guarding its treasures well. But as more and more tourists find it, I worry some of the uniqueness, the heritage, and the environmental systems will be lost.  So the paradox – or catch 22 – of this article: go to Peru for all the reasons outlined above, or – don’t visit this country so that all the above will remain as unspoiled as it currently is.  I suggest go now in case it changes, but tread softly please, so it does not.

Contact your real travel expert about your Peru adventure!

For more information on Peru,  check out our interview with a real travel expert, Colleen Atherton owner of Eaglewings Travels, who spent a glorious 16 days in Sept. 2021 in Peru: a river cruise on the Amazon with all it wildlife, stays in Lima and Cusco, and a trip to Machu Picchu!

Header image of vicunas and footer of girl with llama are courtesy of Pixabay.