Skip to content
Mykonos | The Island of the Winds

MYKONOS | ISLAND OF THE WINDS

The Winds & the Island

Before it was discovered by tourism in the 1950’s, the island of Mykonos had it rough economically. This island, part of the Cyclades series of Greek islands and islets in the Mediterranean sea, is small, rocky, and dry. The sun shines 80% of the year, a different “wind” blows every season – the Sirocco in the winter and the Meltemi in the summer – there are no rivers in its 85 square miles, and there is little natural water. For centuries , the inhabitants lived off the sea with fishing and ship building, and from their livestock, carving out an existence on granite land with few if any trees. Today the island is a thriving mecca for tourists.

The sunshine and beaches make for popular holiday vacation spots, as do the incessant winds to cool the hot summer sun. Mykonos quickly became a favorite playground for the world’s rich and famous as well as well-heeled Greeks with summer homes when the temperatures rose too high on the mainland. The wind which inhibits the growth of foliage also cools down the summer heat, warms the cooler winter nights and lends itself to the pursuit of popular water sports such as windsurfing, and sailing. There is a thriving nightlife on the island due to tourism, and also fantastic shopping, with high quality brands catering to the wealthy visitors.

The Mykonos winds were once the fuel which drove the iconic island’s windmills now silent and still from grinding the grains. These grains supplied the island bakeries which in turn produced bread to feed the fleet of ships plying the blue waters of the Mediterranean. On a hill above the town of Mykonos, most commonly called Chora or Hora to avoid confusion with the island itself, you can see and visit five restored windmills built in the 16th century, and today preserved as homes and repositories of museums. They are a commanding feature of the skyline.

Another landmark of Mykonos is the small seaside sector of Alefkandra where the buildings line the waterside with balconies overhanging the water. It is commonly referred to as “Little Venice”. This was where the rich merchants built their houses with sea level doors to unload their merchandise from trader ships, a scene reminiscent of the Italian city that lent the area its nickname. Today Little Venice is a popular tourist area with quaint shops, outdoor restaurants and cafes, and artist galleries.

There are many museums and sites of interest in Chora so a day visitor, if he or she does not want to lie on the island’s beautiful beaches, has plenty to see. There is the Archeological Museum, the Aegean Maritime Museum, the Agricultural Museum, a Folklore Museum, the church Panayia Paraportiani, the Town Hall and Matoyanni Street, famous for shopping. As one wanders the winding cobblestone streets between white houses with colorful – but not always the expected blue – trimmings, one must keep an eye out for the town mascot, Petros the Pelican. The original Petros is another blessing of the wind, blown onto the island in a storm in the 1954, and rescued by a local fisherman. With the original pelican endearing itself to the residents of Mykonos, a pelican has been a fixture ever since. 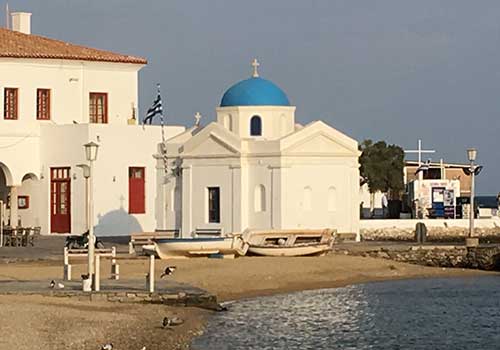 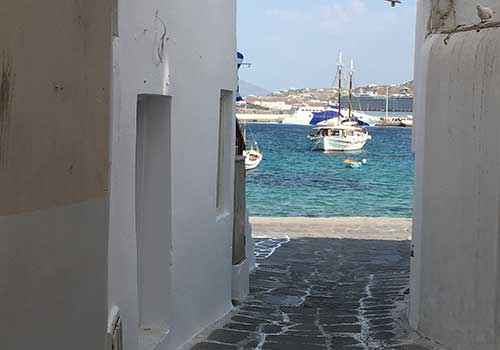 View down an alley to the harbor front (Image: Compass Media) 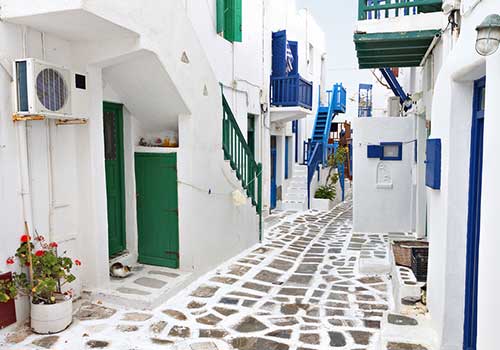 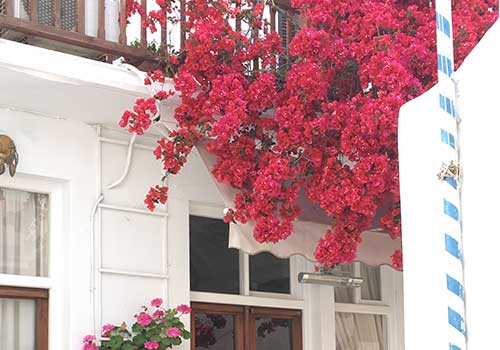 Feature image of the Mykonos windmills courtesy of Bigstock.