How To Compare These Island Destinations

Here are nine interesting observations for the potential visitor comparing the islands.

1. The Canary Islands ( there are seven main ones) have a subtropical climate while the other two groups have climates that are often referred to as Mediterranean – warm, but drier during part of the year. But even in the same group of islands there can be varying micro climates. So, chances are, if you are from N. America, just dress for warm, not hot, weather and you will be fine.

2. All three groups are volcanic based. The Azores have some of the highest peaks in the world – that is, if you measure from the ocean floor. Tremors occur from time to time, the latest in 2011 off the Canary Islands, along with some volcanic activity. If you visit Hawaii or Greece (to name just two popular tourist destinations) without a thought to volcanos or earthquakes , so you should here.

3. The Canary Islands are quite close to the African continent. Madeira is about 300 miles off this continent, and the Azores even further. The islands of the Azores – of which there are nine, not counting islets – are about 850 miles west of Portugal and stretch over an area almost half that distance again. The Azores are the most remote.

4. The Azores have a population of less than a quarter million;  Madeira, composed of three islands, is about the same, but the Canary Islands’ population is about 5 times that at slightly over two million. Popular with tourists, Madeira and the Canary Islands grow substantially in prime tourist season with European visitors. Madeira is a popular stop for cruise ships at its port of Funchal.

5. The Canary Islands were known to the early Greeks, Phoenicians and Romans being relatively close to the mainland. Madeira was probably known but officially does not appear on maps until the 14th century, and was “found” by captains to Prince Henry the Navigator in 1418-19. The Azores, being even more remote, were not officially “discovered” until 1427, again by Prince Henry’s navy. So there will be history but not as you would find in the mainland countries.

6. These islands are predominately Roman Catholic so many of the festivals stem from celebrating various religious dates or customs.

7. Want to get back to nature? Visit the Azores. From physically demanding activities such as hiking, biking, scuba diving and so on to more sedate adventures in bird or whale watching and/or photographing the beautiful scenery, this is the place for you.

8. Like to visit museums and gardens? Stop by Madeira. In Funchal, you will find the Story Centre which tells the history of the islands. And there are plenty more museums – over twenty on the islands – with attractions from wine to sacred art. And when you are tired from that and if you don’t mind black pebbly sand, there’s just as many beaches as museums on Madeira, the main island. A few beaches such as those on Porto Santos are beautifully golden, rather than black.

9. Like variety? Visit the Canary Islands. Tenerife and Lanzarote are probably the ones most well known in this group. There are many resorts with man-made beaches (the natural ones are black volcanic sand), lots of nightlife, nature attractions such as the famous Parrot Park or whale watching, water sports, land sports and places of historical interest.

Remember this is just a generalization as each island is quite unique within its own group of islands. Don’t pass up the opportunity to visit these beautiful destinations of Madeira, the Azores and the Canary Islands if you can.

The best way might be to “sample” the islands on an ocean cruise so look for the itineraries that may have one or two of these islands as ports of call. (It is doubtful if any itinerary would visit all three groups.) Generally, it will be on the higher end cruise lines that you will find these. Then if you would like to experience the area further, you can book a holiday there with confidence knowing first hand which island speaks to you.

Aerial View of the Azores (Bigstock) 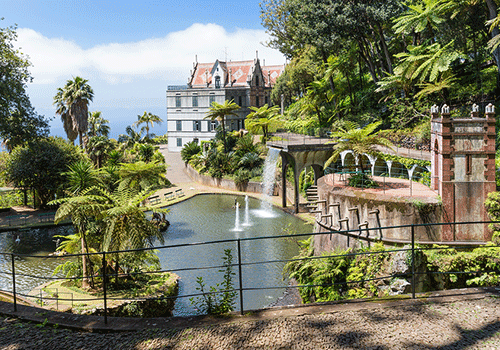 Feature photo of the Azores courtesy of  Pixabay.