Scotland is a magical place not unlike its neighbour, Ireland, with stunning scenery, friendly people, and an abundance of both tragic and inspiring history.  Setting of the series of Outlander books by Diane Gabaldon, which is now the basis of a popular and successful television series, Scotland as a tourist destination is enjoying the limelight even more.

Here is an exploration of six of the places you may see (or read about) in this tale of the English versus the Scots. They may not have the same name or historic use, but you will probably recognise them. 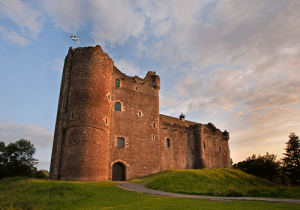 Castle Doune. This is a 14th century castle built by the Duke of Albany in the county of Stirlingshire. It has a striking silhouette, Lord’s Hall with musician’s gallery, and more amazing period features. It is a well used movie setting having been featured in the past by other productions such as Monty Python’s Search for the Holy Grail and the TV show Game of Thrones. It is open to the public daily, all year, with admission. 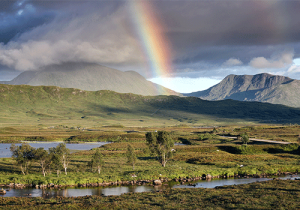 Rannoch Moor. Located in Perthshire, this is a vast area of wilderness consisting of bogs, rivers, fields of wild flowers, many species of birds, and other wildlife. These are found thriving around rocks, in the grasses, and in the wetlands. What you will not find here are magical standing stones on a hill. Unless you are into hiking, view this place from public transport such as a train ride or with a guided tour. 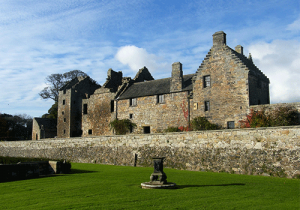 Aberdour Castle. This may be the oldest masonry castle in Scotland still standing. It was started in the 13th century by the Douglas Clan in Fife, and was expanded upon for three centuries beginning in the 1400’s. You can visit this beautiful old building daily on the Forth, stroll its enticing walled garden and dine in the tea room on the ground floor. Admission to the remainder of the castle is difficult, especially for the mobility-challenged, and unless on a guided tour, you may not see much beyond the two areas mentioned. Abbey scenes were filmed here in the Old Kitchen and Long Gallery. 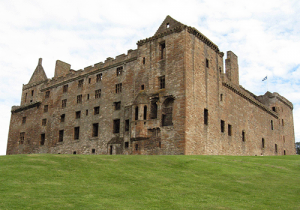 Linlithgow Palace. Magnificent from a distance, closer you can see this palace is mostly a ruin ideal for gloomy, ominous prison scenes. Two Scottish monarchs were born here: James V and Mary Queen of Scots. It boasts a beautiful park setting beside Linlithgow Loch in West Lothian. The palace is open to the public with guided tours and is an excellent insight into the everyday life of Scottish royalty of bygone years. The Palace hosts a medieval jousting tournament each year. 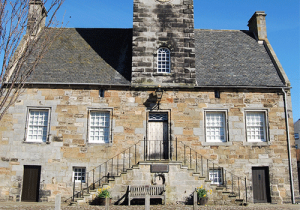 Culross. Exploring this town overlooking the Forth of Fife is like stepping back in time with the wonderfully preserved buildings from the 16th and 17th centuries, thanks to the National Trust. See the colorful yellow merchant’s house with the misleading name of Culross Palace, the Study House restored to its 1610 beginnings, the Town House remembered for its witch trials, and the Back Causeway, a cobbled lane way. As would be expected with the excellent historical preservation of this town, many areas are used as backdrops to the story. 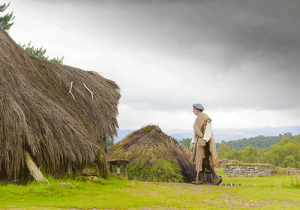 Step back in time like Claire at the Highland Folk Museum

Highland Folk Museum. Interesting to visit in its own right, this reconstruction of a 17th century highland village in Newtonmore, Invernessshire, is a must see for those interested in a glimpse of everyday life as it would have been back in the 1700’s through to the last century. As it encompasses a site more than a mile in length and over 30 structures, one must set aside several hours to explore. It is only open seasonally as it is an open air museum so plan accordingly. What better place to film the rural crofting life!

Most of these locations are clustered not far from Edinburgh excepting the Folk Museum which is north of the city nearer to the actual locale of the Frasers, around Inverness and Loch Ness. Both Inverness and Fort William are grand bases for exploring the Highlands.  Culloden battlefield is close by Inverness (see the small stone commemorating the Clan Fraser’s participation as well as one for each of the other clans that fought with Bonnie Prince Charlie), as are the ruins of Urquhart Castle. You can take a boat ride down Loch Ness (pictured above, watch for the monster!) and photograph the dramatic countryside. A snippet of advice to all this exploration of  the highlands: Unless you like touring in cooler to cold weather,  it would be wise to schedule your tour in the warm summer months after mid-May and prior to mid September. Gulf Stream or not, Scotland is quite far north and the wide open moors are a boon to wind, and miserable accompanied by cold rain. What may look romantic on the screen is not in real life! Also do check that many of these locales are open when you intend to visit. Inspections, weather, seasons, and more can affect open times.

If this series – or Scotland – intrigues you, contact your real travel expert about either arranging a custom tour of Scotland, or reserving a group or private guided land tour specific to visiting many of the sites featured in the television series : there are many available.

For a full listing of the locations used in the television series so far (and you can also download a map of their location), check out Visit Scotland.

Have you a Fraser in your family tree? Be a supporter of Clan Fraser here.

Consider combining your tour with a whisky (how it’s spelled in Scotland) tour , or with a trip to the Isle of Skye.

Photos courtesy of Bigstock and Pixabay.