Skip to content
Previous Next
The Old Bridge of Florence

Florence in Italy is full of wondrous sights for the visitor but perhaps the most beautiful spot, especially of an evening, would have to be the “old bridge”, Ponte Vecchio. Crowded most days with shoppers, sightseers, musicians and, alas, great opportunists (pickpockets), you may be hesitant to wade in but as with all locations some times are busier than others so check back several times during the day. Or throw caution to the wind, join the exuberant crowds, relish in the exciting atmosphere, shop the jewellery stores, dine in the restaurants, and snap photos, and hide your valuables. You are, after all, just repeating ancient history – in a way. 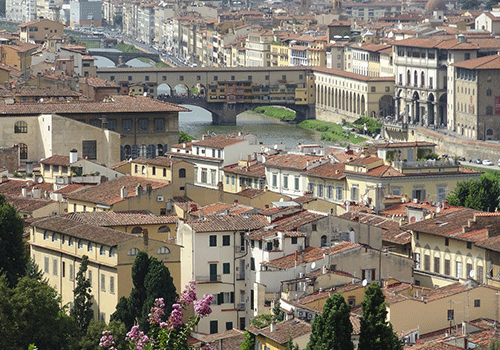 An aerial view of Florence with the Ponte Vecchio easily distinguished by the buildings on the bridge.

The Ponte Vecchio is the oldest bridge spanning the Arno River. It’s big, it’s low slung, and it’s strong. There have been other bridges on this spot since Roman times as this is where the river narrows but the Arno floods and destroys repeatedly over the years. The current version of the bridge however, attributed to Taddeo Gaddi, was built in medieval times to withstand the flooding, even the disastrous one of 1966 which, after centuries, damaged some of the buildings but not the bridge. Originally, four towers were constructed by different prominent citizens to guard entrance, only one on the south remains today, the others swept away, not by water but by convenience. 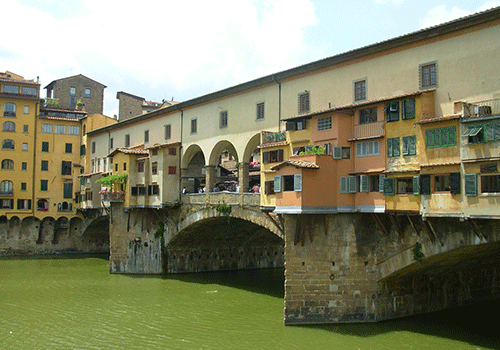 The bridge with its overhanging buildings supported by “sporti”.

Originally lined with butcher shops and tanneries where merchandise was displayed on tables outside the workshops, the ruling class changed the bridge’s atmosphere in the 1500’s. The foul smelling shops were out and the goldsmiths were in – more fitting the image this nobility wished to portray. But crowds of people were present on the bridge then as now so that passage still presented a problem. Enter Giorgio Vasari who designed and constructed a walkway over the roofs of the bridge’s shops (an original medieval pedway!) for the Duke of Florence, a Medici, so he could traverse the bridge from his home and continue to his work for almost a kilometer untainted by contact with the ordinary citizen on the street. The Vasari Corridor as it is now known angles around the remaining bridge tower, the Torre dei Mannelli, as its owners were the only ones who refused to tear down the structure for the Duke’s convenience. 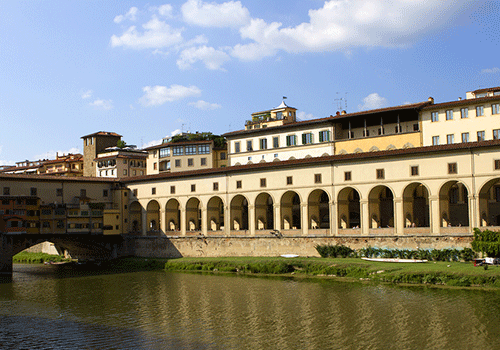 A view of the Vasari Corrido, Mannelli Tower and Ponte Vecchio.

And just as it has withstood flooding and the whims of dukes, Ponte Vecchio has also survived through wars. All the bridges across the Arno were demolished to stop the Allied advance in the Second World War but this one. Legend has it was Hitler’s sentimental enjoyment of the beautiful view from specially installed windows ( known as Hitler’s windows) in the Vasari Corridor above the bridge that gave the bridge its reprieve; however, it was more likely the actions of Gerhard Wolf, German Consul to Florence, a man of great principle and a lover of the arts. Whatever the truth, the Ponte Vecchio stands today as it did nearly seven centuries ago. 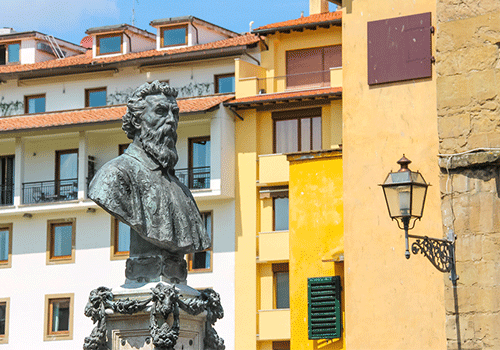 BenvenutoCellini, famous Goldsmith for the 1500’s

The goldsmith tradition has remained since the sixteenth century with a host of shops today selling jewellery, from the inexpensive to the highly priced. So do the houses remain, built to hang out over the sides of the bridge as time went on. Ponte Vecchio has stayed fairly true to how it would have looked four hundred years ago. Many of the buildings that were demolished around the entrances to the bridge at the end of the last war have been rebuilt, replicating earlier times. A statue of Benvenuto Cellini, a prominent goldsmith from the Duke’s era has become a tourist draw on the bridge. It is like a walk in the past in many respects, especially at dusk, romantic and enchanting. 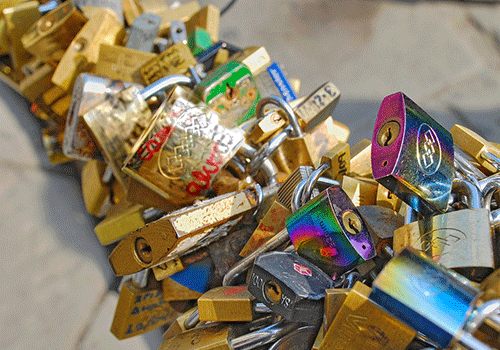 You may also see a few love locks attached to the fence surrounding Cellini as the romance of it all has caused some lovers to risk a steep fine for attaching their engraved padlocks to any part of the bridge and throwing away the key into the Arno. If anywhere would symbolize the qualities of steadfastness and endurance over time, it would be the Ponte Vecchio. You will smile at the apt choice of area for these wishful love locks. 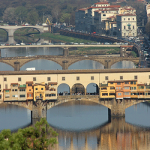 This article was written by D. MacIntyre of compassmedia.us . Photos courtesy of pixabay.com or bigstock.com