Skip to content
Trier: Traces of Rome in Germany

TRIER | TRACES OF ROME IN GERMANY

Not far from Koblenz, nestled in the valley between vineyard covered gentle hillsides and hugging the shores of the Moselle River is a quaint town. Despite its small size, Trier, Germany has an important historical presence quite in contrast with its first appearance. Here are some interesting facts and places to see if you visit Trier on a Moselle River cruise or on a European tour.

1. Trier is perhaps the oldest city in Germany. It celebrated its 2000th birthday in 1984 but claims to have existed almost that many years again prior to its founding by the Romans in 16 BC.

2. Trier was originally protected by four miles of Roman wall, each with a massive gate, and over forty towers as befitted one of the largest cities in the known world in the fourth century. One gate survives to this day: the Porta Nigra or Black Gate. It served intact as a church and monastery for centuries but thanks to Napoleonic wars, the church portion was destroyed .The Gate as it stands now is an impressive tourist draw.

3. The Trier Cathedral is the oldest Christian church in Germany. It contains important relics of the Catholic Church: the Holy Tunic said to be worn by Jesus at his crucifixion and a holy nail from the same. Unfortunately, though the Cathedral is well worth a visit, the relics are not on usually on display.

4. The Constantine Basilica near the Elector’s Palace is the largest Roman structure outside of Rome that is still standing and intact. It contains the long throne room of the Roman Emperor Constantine who was largely responsible for the early grandeur of Trier.

5. The city contains many other churches of note but perhaps the most beautiful is the baroque structure of Saint Paulinas. 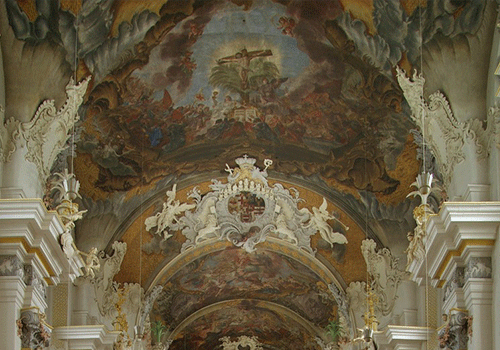 6. A monastery , St Matthias’ Abbey , is purportedly the burying place of its namesake. Trier’s main street is named after another of its saints, St. Simeon, a recluse originally from Greece who lived in the Porta Nigra for years in the 10th century.

7. Other Roman structures are also present. There is an old Roman bridge built in the 2nd century that is still in use, the oldest of its kind in northern Europe. No Roman city is “worth its salt” without an amphitheater – the one here sat over twenty thousand in its day – and baths. The baths are in ruins; however they were never fully completed before abandoned by Rome. Nevertheless, the construction left behind nearly a mile of tunnels which still exist.

8. Visit the archaeological museum if you wish to see a fine collection of Roman art and artifacts.

9. The town’s market square is worthy of a visit as well, not only for the typical atmosphere provided by the market stalls and sellers, but also to view the market cross from the 10th century.

10. Another place worthy of a stop is the Karl Marx House. Marx was born in Trier in 1918. It is open to the public with exhibits of Marx’s work, including some rare items, and exhibits on the socialism of his time.

So you can see if your itinerary should include the town of Trier, that it is not another in a succession of picturesque German towns with timbered houses, old stone buildings and the usual market square. Actually none of the German towns and villages you visit on a river cruise are exactly the same:  all are rich in history. So get on your walking shoes and explore!

Feature photo courtesy of  Saint Paulinas Church courtesy of Bigstock. Looking for more historical places in Germany? Check out the Middle Rhine with its many castles.