VENICE OF THE NORTH: AMSTERDAM

Amsterdam and its Canals

Flying to Europe from North America often leads you to Amsterdam. If you cruise in northern European or take one of the popular river cruise vacations into the heart of Europe, you will likely cross paths with this city as a beginning or end point. One of the favorite pastimes of visitors to an unfamiliar city is to take a city tour, either a guided walking tour or one of those hop on/hop off buses so that you can familiarize yourself on where to go and what to do. In Amsterdam, you should take a canal tour instead.

Look at any city map of Amsterdam, and you will quickly see why. The city seems to be built in an elaborate ring shape with concentric canals making up the layers. There are literally hundreds of miles of canals and about 1500 bridges – that is, if you wished to cross them all, which you won’t. This is not the place to suffer from gephyrophobia (fear of bridges)! Canal boats and bicycles appear to the North American to be the predominant methods of transport, perhaps because they are unusual to our eyes accustomed to automobile traffic jams. Watch out for the bikers by the way: they cycle with Dutch determination and single-mindedness. But we digress …

Houseboats Along a Canal – a Common Sight (Image: Bigstock) 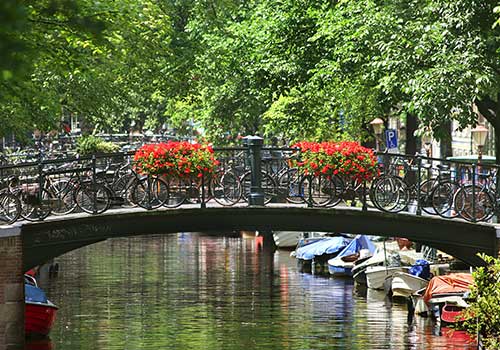 The canals of Amsterdam did not spring up in haste as required but were actually planned over a number of centuries. The earliest and innermost canal, the Singel, was built in the 1400’s when it served as a moat. The oldest canals are at the heart of this ancient watery city, and this is where you also find the infamous Red Light District (which is a whole article onto itself). Though there are many canals radiating out from the center, some built to aid residential development, some for transport (for example, food and beer), and some for defense, there are three main ones: the Lord’s or Gentleman’s Canal, the Emperor’s Canal and the Prince’s Canal. These encompass the majority of the area which is now a UNESCO World Heritage Site. 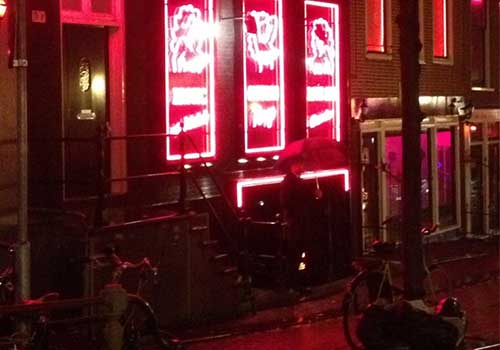 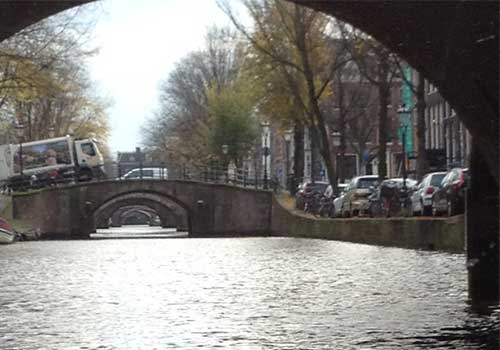 Here’s a sample what you might find along each.

The Lord’s Canal was, and still is, home to stately residences all built from brick and stone. The earliest houses in the city were destroyed by fires in medieval times, the last in a large fire in 1597, so architecture for the most part does not pre-date that date even though the city was founded in the 13th century. Watch for the Tunnel of Love, a view of the seven bridges of the Reguiliersgracht. These can be seen one after the other appearing much like a tunnel when viewed from the waterline, and is especially beautiful when lit after dark. The other building of note is the Museum Willet Holthuysen, in which the interior from the 1600’s is still intact and a show onto itself.

The widest canal is the Emperor’s Canal. Many former business-oriented buildings will be found here including the Greenland Warehouses (as in whale hunting products), and the Red Hat (originally a hat maker’s). Watch for the John Adams House, his residence during his ambassadorship years, and the home of Amnesty International, the Coymans House. Most of us will visit Amsterdam in the warm weather months but in winter, this canal freezes over and is used for skating.

Last, but not least, is the Prince’s Canal. Look for the Anne Frank house and museum (not the same building!), the famous Café Papeneiland at Brewer’s Corner, one of the oldest cafés in the city dating from the 1600’s, a houseboat museum, and the stork at the corner of the Reguliersgracht (an old form of advertising midwifery). See if you can spot a five-foot wide canal house of 5 stories. There are many narrow, but tall, houses in Amsterdam necessary from the time when paying tax was based on your canal frontage – but this one  narrow should really stand out! 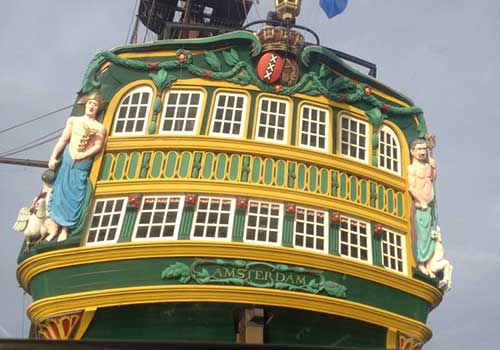 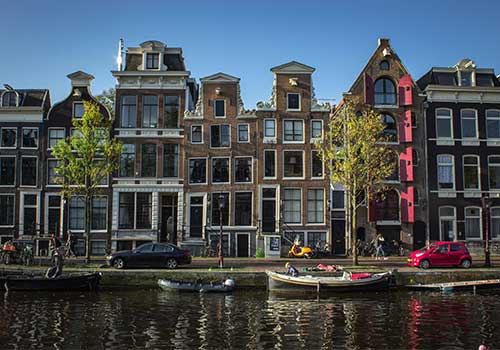 A Canal Tour is a Must-Do

Almost every building along the canals has a story, and the only way to take it all in is with a guided canal boat tour. If this excursion is not included on your river cruise itinerary or if you are just visiting the city on your travels, do take the time to participate in one of these tours. You will not only get a great overview and understanding of this city and its people, but you will definitely be taking notes of all the wonderful places you want to visit – on foot – later.

As previously indicated, many of the Rhine River and cross-the-continent river cruises either start or end in Amsterdam. Your river cruise professional would be happy to help you choose the river cruise line and itinerary best suited for your tastes and budget.

Tulips for sale in an Amsterdam market (Image:Pixabay)

Visit Amsterdam on a Tulip Time Cruise. Main image of bicycles parked along a bridge courtesy of Pixabay.