Skip to content
Victoria Falls | In the Footsteps of Livingstone

VICTORIA FALLS | IN THE FOOTSTEPS OF LIVINGSTONE

If it is your dream to go on safari in Africa, one side trip of any safari you should not miss is a visit to Victoria Falls. The great explorer David Livingstone set out in 1855 in response to a rumor of a magnificent waterfall. He journeyed down the Zambezi River to stand on an island outcrop above the falls, now titled Livingstone Island, to view what he called “the most wonderful sight I have witnessed in Africa” with “scenes so lovely (they) must have been gazed upon by angels in their flight”.

Livingstone left his mark, naming this wonder “ Victoria Falls” after the reigning monarch of the British Empire, and lending his own name, not only to the island upon which he stood, but also to the nearby town. Of course, long before Livingstone appeared on the scene, the local tribes people, the Kololo, had named this wonder of nature “Mosi-oa-Tunya” or “The Smoke That Thunders.” – perhaps a much more suitable name.

The falls occur half way along the course of the Zambezi River where there is a rift in the surrounding basalt rock plunging river water deep (about 300 feet on average) into the narrow Batoka Gorge.  The river flows through Zambia, Zimbabwe, Angola, Namibia, Botswana, and Mozambique – making it one of the four longest rivers on the continent. The Falls straddle both Zambia and Zimbabwe equally. The mist from the Falls waters a rain forest on either side of the gorge, and creates both rainbows during the day and moonbows at night. Don’t plan on staying dry during your visit! 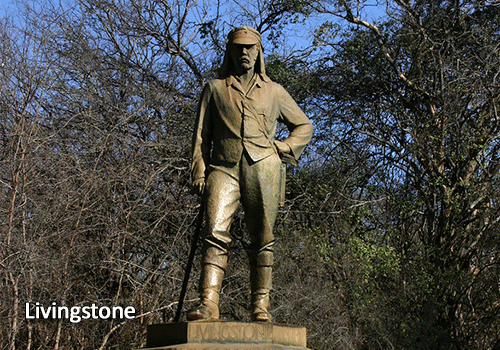 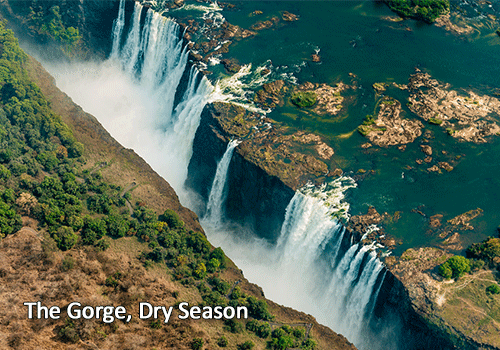 During the Dry Season  (Image: Bigstock) 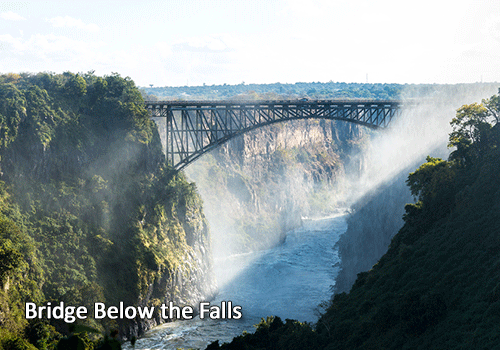 Bridge Below the Falls  (Image: Bigstock)

The Seasons and Their Affect on the Falls

The seasons play havoc on the Falls’ appearance.  Both wet and dry seasons have their merits for viewing, but perhaps the best “compromise’ would be midway between the two, July and August. At the height of the rainy season (our Spring), the Falls are over 1 mile wide, with spray visible for a dozen miles distant. So much spray is generated that is becomes almost impossible to view the Falls from the various walking paths on both sides of the Gorge. One needs to hire a helicopter or, for the brave, a microlight flight that will fly over the Falls, the surrounding national park, and the gorge.

In the dry season (around December), the torrent of water becomes a comparatively tame flow, in places not “falling” at all so the Falls are spotty along its normal width. This season does let the adventurous swim in the Devils Pool, which is a naturally-formed pool right at the lip of the Falls. One is prevented from going over due to the wall of the “lip” which forms the pool. You can also purchase a guided tour along the base of the Falls and swim in the pools below for a magnificent view of the towering cliffs of the gorge rising above you. Rafts trips are popular too. These are called the “float of the angels” reminiscent of Livingstone.

So if you are on safari with a tour group, or on a river cruise, most of these vacation choices offer an extended stay to Victoria Falls.  Ask your real travel expert to make the arrangements. When you are this close to the largest and most impressive waterfall in the world, why not experience it? It is a photographer’s and nature lover’s paradise. You won’t regret it. 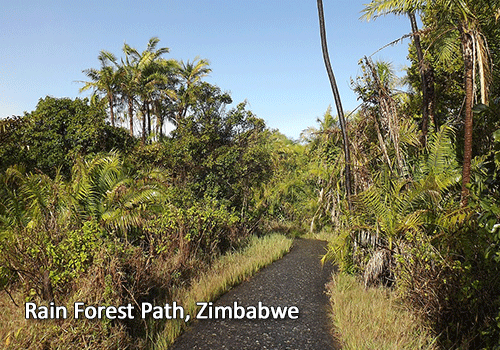 Path along the Falls  (Image: Pixabay) 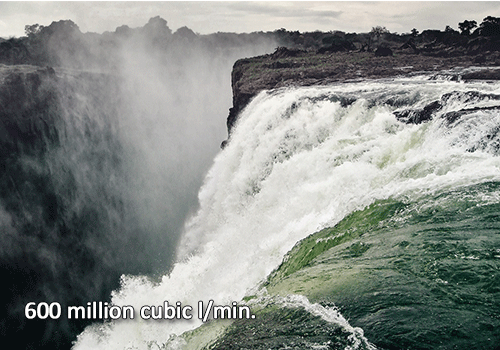 Header image of Victoria Falls is courtesy of  Bigstock.