Skip to content
The South Pacific is Waiting for You

The South Pacific is Waiting for You 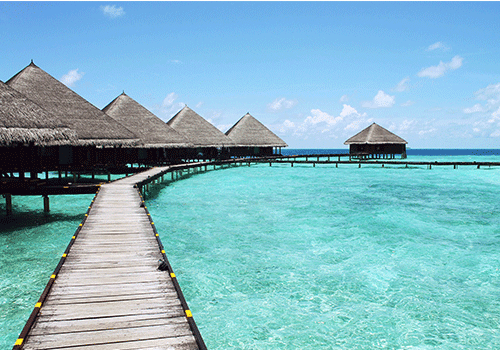 Had a busy year at work? Ready for a relaxing beach vacation? I know just the right place. The South Pacific resorts with over water bungalows.

The average weather year round is 80 degrees.

The islands of Tahiti, Bora Bora and Moorea are the three most popular islands in the South Pacific where you’ll find over water bungalows.

All flights from LAX arrive in the city of Papeete on the island of Tahiti.

With a population of 178.000 the island of Tahiti is the largest island in French Polynesia, the South Pacific archipelago. The two over water bungalow resorts are The InterContinental and Le Méridien. The bungalows are closer to the shoreline than the resorts on Bora Bora and Moorea.

The flight from LAX arrives in Papeete later in the evening. With no transportation to the other islands late at night, you’ll have to
spend it at least one night on the island of Tahiti. You can take advantage of all there is to do on this island such as full day
jeep safari, waterfront Segway tour and catamaran boat tours to name a few.

Moorea (population 16,000) is known for its jagged volcanic mountains and sandy beaches. You can get to Moorea by taking a 30 minute ferry from Papeete. The over water bungalows in Moorea are the Sofitel, InterContinental, Hilton, Manava Beach Resort, and Club Bail Hai.

Bora Bora (population 9,000) is surrounded by sand-fringed motus (islets) and a turquoise lagoon protected by a coral reef. There is no other way to get to Bora Bora but to fly from Papeete. The flight time is 50 minutes. You’ll then take a short boat ride to your resort. There are 10 resorts that offer over water bungalows on Bora Bora. Too many to list in this column so you’ll just have to call me to find out more!

The flight back to LAX departs late in the evening. Renting a “day room” at a resort until your flight departs is what I suggest.

I’ve visited all three islands and each are beautiful but in very different ways.

This article was written by Beth Schulberg and appeared on Cruise & Travel Specialists. Image courtesy of  bigstock.

About the Author: Beth Schulberg

Beth Schulberg has owned Cruise and Travel Specialists since 2002. She realizes what makes the difference in remaining a viable business are the relationships she has with her clients along with excellent service and travel knowledge. If you’re looking for an experience of a lifetime, you’ve found the right travel specialist. Having been on over 100 cruises since she started this business, she knows because she goes! Learn More About Beth