Skip to content
Previous Next
Are We Getting Soft?

Again the media is having a field day reporting on the latest “disaster” at sea involving a cruise ship. Of course I am referring to the fire in the engine room on board the Carnival Triumph and the subsequent discomfort of the passengers on board. It brought to mind a visit from a few years ago to a replica emigrant ship docked in New Ross, Ireland. Hubby and I took a tour aboard the Dunbrody Famine Ship, a museum dedicated to the thousands of poor Irish who emigrated on these ships to the United States in the mid 1800’s. I had numerous ancestors who came out from Dublin and Mount Mellick to Canada in the last century which prompted my curiosity and a side trip to this quaint seaside town.If the internet, television and radio with its powerful reach had been available back then, what would the news stories have been? Probably very similar. 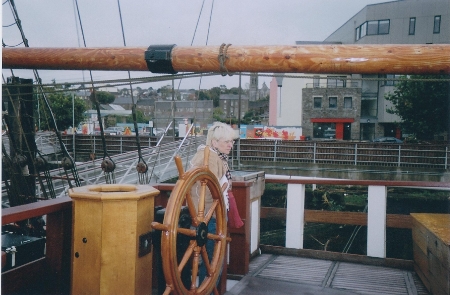 Author on Board the Dunbrody

However these emigrants were not on a vacation but on a mission to improve their lives;  their passage price in most cases cost all the money they had in the world and perhaps all that of relatives left behind who were too old, sick or scared to chance the journey themselves. Because of rough seas being the norm in the north Atlantic, these folks were confined below most of the time to avoid being washed overboard; and their voyage lasted six to eight weeks in conditions where cholera and typhus were an everyday threat. 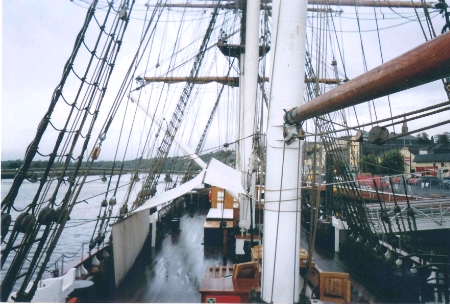 The Deck of the Dunbrody 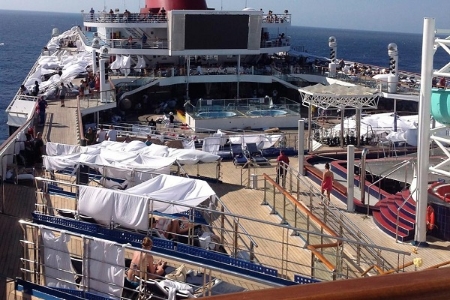 Deck of the Triumph

As horrible as conditions have been purported by those passengers on lower decks  and inside staterooms of the Triumph( compare steerage ), their very lives were never in danger either from high seas or from the scourge of cholera. Some may have had to use red biohazard bags for their daily functions as compared to wooden buckets but at least they could escape to the open air on the upper decks rather than endure the fetid air for weeks at a time. To have to eat  fresh fruit and not the scrumptious cruise ship dinners would be a bummer I admit  but much better than month old biscuits full of creepy crawlies. As far as rats go, well, maybe in this case there were some of the two legged variety. And these vacationners were at sea a few days compared to the emigrants’ forty or fifty. 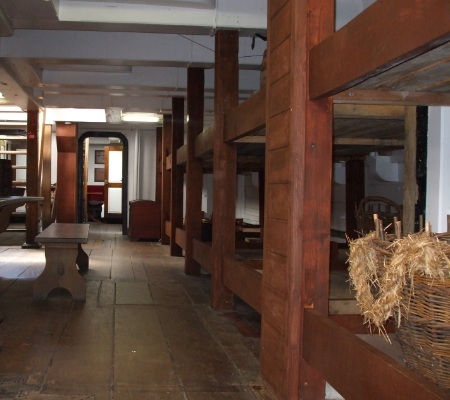 Sleeping on the Dunbrody 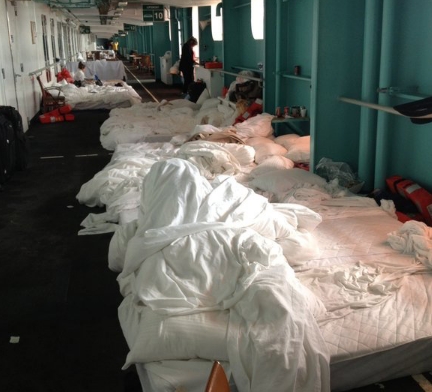 Sleeping on the Triumph

But I hear protests of “but these were vacations or honeymoons or anniversary cruises!”, not emigrations. Yes it was a miserable outcome for a promised happy occasion, but I still feel that we, today, are “un”becoming what our ancestors were: accepting of the lot that came their way, deserving of it or not, and making the best of it.  And by that I do not mean using the opportunity to sue over an accident! Fires happen. Hurricanes happen. Earthquakes and tsunamis happen. And if you will excuse the reference, as in this case, shit also happens.

In no way am I excusing the cruiseline if it turns out the whole incident was preventable. And kudos to those folks on board who made the best of a bad situation. But, for the rest,  if it were truly an accident of fate, then thank whomever you believe in that you had the opportunity to experience a little of what your ancestors may have endured without the threat of death hanging over your head, and rejoice in the relationships and the goodness you found in your fellow passengers which you may never have experienced with a normal vacation.

Read more of the author’s visit to Ireland in the post “ Don’t Think – Just Jump” .