Skip to content
Puglia, Italy | Home of the Trulli

Puglia, Italy –  Home of the Trulli

Thinking of traveling to Italy on a vacation? You are not alone in wanting to visit this European country sandwiched between the Mediterranean and Adriatic Seas. Most folks opt to see Rome, Florence, Tuscany and the Italian Riviera or perhaps the Amalfi coast. You should certainly visit these beautiful regions for their history, culture, and cuisine but there is one part of Italy that many tourists forget– and that is Puglia.

Less popular with visitors and hence less crowded, this region is found on the backside of Italy’s “heel” with the Adriatic and Ionian Seas at its coast. Why is this area recommended? Here are a few of Puglia’s highlights.

Here you can visit small towns nestled in the hills for centuries, drink in the views of surrounding farmlands and orchards, ramble along the country roads  find that next cultural gem. There’s no rush here so be prepared for a laid-back visit. Shops close over the heat of the midday, old men play cards and chess in the town squares, and vespas scoot along the narrow streets.

Did you know that olive oil is a major crop? Almost half of Italy’s crop is harvested, and the oil produced here. Historically, bread and pasta were also prevalent products giving Puglia the nickname of the “bread basket of Italy”. There are still many wheat farms to be seen which may be an unexpected sight.

And then there is the wine. Believe it or not, the Puglia region is one of Italy’s largest producers of wine. Its grapes have a very distinctive and fruity flavor.

But There’s Cities Too

Leece can’t be missed. With origins back to the 3rd century, it is best known for its distinctive baroque architecture. Known as the “Florence of the South”, Leece’s best example of this architectural style is in the Basilica di Santa Croce. It’s stunning limestone stone façade of everything from sheep to cherubs contributed to its very lengthy two-hundred-year build. As well visit the Piazza del Duomo with its 230-foot (70 metre) bell tower. If you want even older historical architecture, there’s always the remains of the Roman amphitheatre in the Piazza Sant’Oronzo. Be sure to purchase a papier-mâché figurine as a souvenir. Leece is renowned for this craft which started in the seventh century and has been passed on now for many, many generations.

Bari is Puglia’s capital city in the province or commune of the same name, one of six making up the region of Puglia. It is an important economic center and university city. It lies on a jut of land between two busy harbors. Here also you will find one of the two major airports for Puglia. Visit Castello Normanno-Svevo, a twelfth-century structure and currently an exhibition center or the Bari Cathedral of the same vintage for your history fix.The Teatro Margherita (now a museum) where Pavarotti and Nureyev have performed is another suggested stop. Photograph the colorful small boats in the old harbor or enjoy the many delicacies on offer from street vendors.There’s fashionable shops and a busy nightlife. 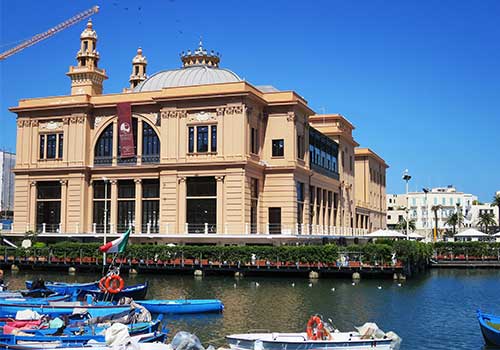 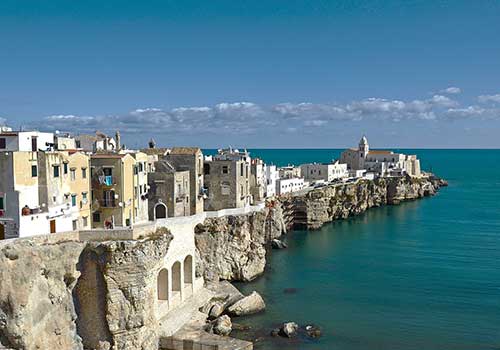 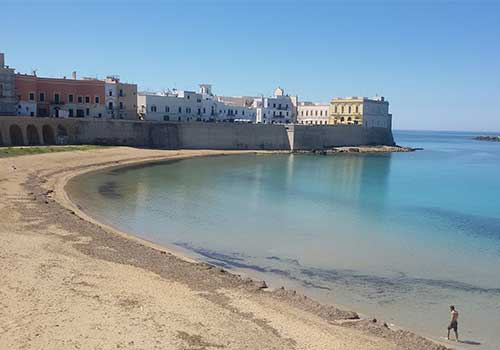 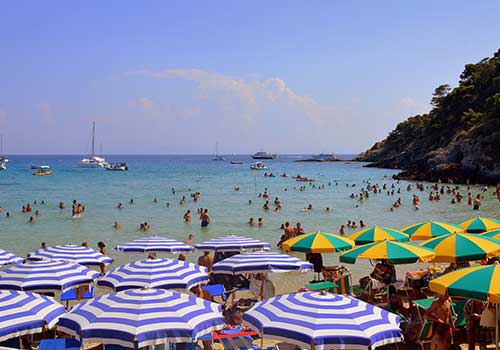 Puglia has the longest coastline of any Italian region and so it follows that a beach is not hard to find. No matter where you are, one is not far away. The vast majority of tourists are Italian and they flock to the umbrellas and sun lounges by the sea. Be forewarned that you may have to pay a fee for access as a lot of the beaches are private. You can find “free” ones such as those near the town of Gallipoli but it may require some patience. But as a North American tourist chances are you are not visiting Puglia for its beaches anyway but the sea of colorful umbrellas is a fascinating sight!

One cannot visit Puglia without observing the signature gem of the region – a trullo. Your best bet to find these structures en masse is by visiting the UNESCO town of Alberobello where there are complete streetscapes of these stone houses dating from medieval times (well over a thousand trulli, with a few open to the public). The main dwelling is a whitewashed drystone structure built generally in round sections, but it is the roof that is the distinguishing feature – conical like a dunce’s hat or a witch’s hat without a brim. Often there are symbols painted on the roofs: the evil eye, cross, heart, etc. chosen by the inhabitants and re-painted annually. On the tip of the roof is a carving unique to the builder and is his signature, the same as an artist signs his painting. Originally believed to be built by invading Turks, you will not see these trulli anywhere else in Italy.

Puglia is very “Italian” so you will not miss out on the food, wine, and everyday life that is present in the other parts of the country should this be the only area you visit. Enjoy your gelato, your pastas, your fresh salads, your wines. Seafood is fresh as well as plentiful being so near the sea: dine on shrimp, octopus, anemone, mussels, sea bass and more. Expect a regional twist or two to your cuisine. Bari is known for its cucina povera, that uses only fresh and local ingredients. Best known is an ear-shaped pasta variety made without eggs (just flour, salt and water) and the riso, patate e cozze (translated that is rice, potatoes and mussels) a dish that is baked in wood-fired ovens.

Because this is not an international hotspot, less English is spoken in Puglia. In the small towns and villages, you may observe a lifestyle that may not have changed much in many years. It’s charming, it’s the Italy you hope to see and experience but without the crowds of other tourists. Visit early spring or late fall to enjoy Puglia with even less tourists and to avoid the hot summer sun.

Consult your real travel expert for professional advice if you wish to journey here. 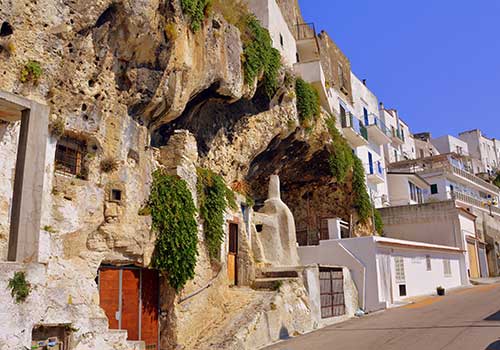 Like to read more on Italy? Here is a recent article on a visit to Capri. Or check out these articles on Florence,  Rome  , and Venice.

Feature image of  trulli roofs with symbols courtesy of Pixabay.