Rhodes the City, on the Island of Rhodes

Rhodes is a very popular spot for tourists, but not one you hear about often or see in many travel photos. If you are going to Greece or Turkey, especially on a cruise, it should be one stop you should look for on the itinerary. The reason? There are few other places where you can see a myriad of cultural history and architecture in one place, the beginnings of which stretch back to 400 BC.

Mandraki, entrance to harbour at Rhodes

Rhodes is both the name of the largest island in the Dodecanese chain of islands in the eastern Mediterranean and also the name of its capital city on the northern coast. There are two reasons you may remember Rhodes from your school days – the Colossus of Rhodes, and the Knights Templar
The Colossus of Rhodes was a gigantic bronze statue at the entrance to the harbour, and though only mentioned in ancient historical works and with no trace of it remaining ( it was destroyed by an earthquake in 224 BC), it has still been declared one of the Seven Wonders of the World. Remember those? Visit Mandraki, the marina outside of the old town with its deer statues and imagine what the Colossus must have been like once. The present day smaller statues are unique and deserve your attention equally well.

Palace of Grand Master at Rhodes

The Knights Templar are evident in the old town of Rhodes separated from the “new” town by medieval walls. As in many European cities, the old section has been designated a UNESCO World Heritage site. Here you will see the Palace of the Grand Master which functioned as the headquarters for the Templars starting in the 1300’s. The building started as a Byzantine Temple built in the seventh century, was remodeled by the Templars, and now is re-incarnated as a museum. You can also stroll along a cobbled street called The Street of the Knights to the Hospital of the Knights which has also been turned into a museum, this one on Byzantine history. In the Turkish sector, you can see ancient baths and a mosque. 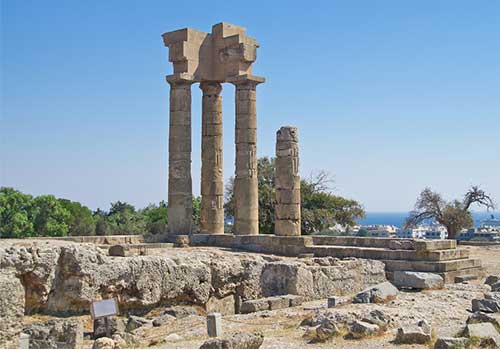 Ruins Of Acropolis In Rhodes

Outside the medieval walls of Rhodes is the relatively newer sections of the city built by the Italians. Over the years Rhodes has been occupied by the Greeks, Romans, the Templars, the Ottoman Empire and Italy, to name a few. Rhodes did not officially become a part of Greece until 1948. Two of the must see’s here are the Aquarium, which is the center of Greece’s marine research, and beautiful Rodini Park where you can relax amongst the oleander, cypress and pine with your reverie of walking in the footsteps of Caesar, Mark Antony and Cicero broken by the sight of an occasional peacock spreading its tail.

If you have time and venture outside the city of Rhodes, there are many colorful and quaint towns, gorgeous sandy beaches for swimming ( Lindos has a famous one), and ancient ruins of temples. If you are the active sort of tourist, there is sailing, wind surfing, kite surfing, cycling and hiking activities to participate in to name a few. But, if you are in Rhodes for only a short time, make sure you visit the Palace of the Grand Master – it is the ultimate must see of the island. No doubt, you will make yourself a promise to return – and stay longer – on the island of Rhodes in the future.