It’s been a while since there has been an entry to this blog. Since the last one there have been two voyages, one on Holland America’s Eurodam and one on the Disney Magic®. The first was basically all work as it was for a convention  and  well, the second one, while quite enjoyable, was quite a stressful one – no fault of Disney’s by the way – it’s a long sad story that has no place here. Sometime in the future the best bits – and there were many – may make it into this blog.

So this evening’s tale is all about spontaneity and while it may be difficult to be a spontaneous traveller all the time, one should spice up one’s life by doing the unexpected every once and awhile. Kow is a great one for the spur of the moment adventures. A few years ago in the autumn, as the result of a road accident involving a tourist’s vehicle, a rental car was driven hundreds of miles to Ontario from its “home” in the Maritimes. We decided to fly that evening to Ontario and drive the car home to its base. It was just a few hours between making the decision to go and to boarding the plane – but it remains one of our most memorable road trips. 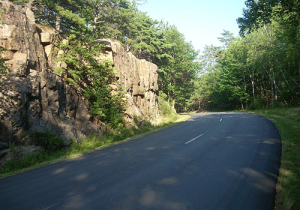 The flight was ho hum – I don’t think I would want an exciting flight ! But the road trip home was an adventure. A few hundred miles into Quebec, Kow decided we are going to make the trip home via Maine instead of Canada. “But we have no travel insurance,” says I. However, in all cases of the road less taken, the driver always wins over the protests of the passenger.  Are you familiar with the television show “King of the Hill” where the guys hang out at the end of the driveway drinking beer and talking? Well, they do that in Maine – at least in the backwoods communities that we drove through. Long winding roads through dark woods, sparsely inhabited except for the drinkers mentioned, it was shades of Stephen King’s brooding atmosphere of horrors impending. Luckily we soon made it into the land of antique stores, one of my favourite countries. Why do men say, after driving five miles past a store a wife points out, “Oh, do you mean the one back there? Did you want to go in? I could turn around and go back …” in tones suggesting they would rather not. Sometimes the tones get ignored.

Eventually we reached Bar Harbour, a small town on the Atlantic coast which was a thriving mass of tourists, even at that late date in the season. We sojourned at a quaint hotel which overlooked the dock for the CAT which plies its way between Maine and Nova Scotia. Kow went to reception and wheeled a deal for a room for the night by “What rate can you give a poor Canuck and his wife from the Maritimes?” Talk about embarrassing.  Luckily we had a great time there exploring the town that evening as every shop and restaurant had a doors-open invitation.  Bar Harbour, we shall return again someday.

The next time we had a spontaneous trip – spontaneous for us is a few days planning as we plot trips months in advance – happened just a few years ago when Kow and I were to go on a business trip to the Niagara region. My concession to the trip was that Kow must take me to Lily Dale in New York State which I showed him on the map was not that far out of the way. (And I planned that we would have travel insurance this time.) Three days before this trip was to commence, Kow announces that instead of driving off to Ontario, he has bought us tickets to Ireland. 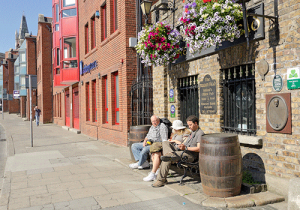 Interesting. Ireland was on my bucket list but not quite this way. Anyway we carefully packed everything for the five day trip into one carry-on bag each, grabbed our passports and departed, flying to Heathrow and then onto Dublin. The sun was shining as we stepped from the plane into the country where I expected nothing but rain. We stayed in Dun Laoghaire (pronounced Leerie to rhyme with eerie ) at the Royal Marine Hotel which overlooked the bay. Of course the first day we took the train into Dublin and did all the touristy things – except see the Book of Kells and tour the Guinness brewery with its St.James Gate which we did spy in passing from a tour bus. (Regrets!) On the second morning, Kow decided to rent a car.  So here we are in a country where you drive on the left and the cars have standard shift as well just for fun. Men. With the car, we also rented a GPS which I heartily recommend as it takes you places you never would have found otherwise even if you had been looking for them.

The rental man warned us that Ireland had quite a few roundabouts. No kidding. On our last evening there, we approached Dublin at suppertime rush hour just as dusk was settling in and half of the country’s population of vehicles was in the same five lane roundabout we were.  The GPS had been quite patient with us throughout our adventures in Irish driving never once raising her voice when announcing “recalculating” when we missed a turnoff; however, on the umpteenth trip around this whirlpool of Hell, she gave up and died – the effort of recalculating overcame her. There wasn’t even time for the wail of the banshee – unless you counted mine. We did make it back to our sanctuary of the hotel by gradually making our way to Dublin Bay and by watching for recognizable landmarks.

Did I mention that I started off this trip with a beautiful set of LCN gel nails which my daughter, a very talented nail tech, did prior to leaving home? I returned with nary a one having picked them all off as I sat next to Kow in that standard rental vehicle navigating the roads of Ireland – not a mean feat as the nails are chemically bonded to your own natural ones.

In case you think we did not enjoy our stay, the reality was that we loved it. From Glendalough where, walking through the woods by the lake, you can believe

there might be faeries after all, to the rocky high in the Wicklow Pass, and to Tara the seat of the ancient Irish kings. Unfortunately with a home base in Dun Laoghaire and just a few days, we never got to venture further than Waterford in the south to Mount Mellick in the west. The latter was a must as it was the home of one branch of the family tree as well as was Dublin. I got a great thrill of seeing the places in the Maeve Binchy novels I had read which were set in and around Dublin. Mt.Mellick  to which I insisted we travel was disappointing and we drove through it without stopping except for the roadworks, which I must admit did make me feel at home. I’m sure it is a wonderful little one street town but great expectations are sure to fall short in reality. We stopped to lunch or dine and explore many a quaint village and town, many of which I could see us retiring to if we had the means and opportunity.

Irish folks were friendly though many seemed a bit stressed as the economy was not as it was – and a European economic crisis was dominating the news at the time. It was amusing that many places one went in Dublin, the waitress or salesclerk was Polish, not Irish. One of our waiters at the hotel indicated that it was resented that people from outside the country were coming there and taking the jobs.  Hmmm – sounds like the complaints of everywhere else.

Kow and I were also amazed that in weather where we would be bundling our babies up in hats and scarves (it was cool jacket weather in September), that we saw many the stroller with behatted toddler who was flailing bare reddened feet. They are a hardy bunch the Irish. And survivors. We visited a replica of one of the Irish emigrant ships of the 1800’s, the Dunbrody (see author aboard in main image above). Fascinating and horrifying that so many people could pack into such a small space with no sanitary conditions and for such a long time. Desperation and hope was written on all the walls.

We enjoyed this Irish adventure and a lot of it was due to its totally unplanned nature – getting up each day and deciding which road to start out on and the only other plan was to be back at the hotel by dark. Kow vows we will return to Ireland again someday. And I vow he still owes me a trip to Lily Dale.

Travel blog Main and feature images from the author. Other photos courtesy of Bigstock and Pixabay.