Skip to content
Our Travel Mascot Gets His Name

How Our Travel Mascot was Named on The Way To …

Disney. To be more precise, it happened in the security line at Port Canaveral where myself, my husband ” The Kow”, my daughter and granddaughter were checking in pre boarding the Disney Magic last Fall. So there we were laden with suitcases and assorted paraphernalia one gathers en route, still stressed from the fact that my daughter and granddaughter had missed their original flight and and we had had a three hour road trip from Fort Lauderdale International Airport where they finally arrived in Florida. Now we were running late and corralling an excited four year old, Belle, who had already glimpsed Pluto hanging on the stern of “her” ship.. Most of the ship’s passengers had boarded at this point. 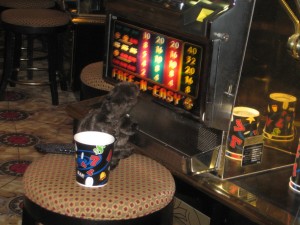 Trying his luck in the casino

Kow and I usually travel with our “mascot” puppet beaver ( see our photos from a cruise on Celebrity). It’s a long story that evolved from a Roll Call group on Cruise Critic) for which Ken purchased the puppet and nicknamed him  “Jimmy the Chopper”. Belle wanted to carry Jimmy along with her roll along suitcase, assorted books on hand to “read” on the trip,  sun hat and so on. She passed all her belongings for scrutiny to the Disney security employees. Being that it is Disney, adults are invisible ( almost) and kids are kings and queens, so much fuss was made of Belle.

“And what’s this fella’s name?” the female security asked Belle as she plunked the furry puppet on the counter.

We left the security folks doubled up with laughter, probably ending their hectic day on a high note.

So Justin Beaver he became, and he is now the Compass Media mascot. Look for him to pop up from time to time here and on our Facebook page Real Travel Experts. 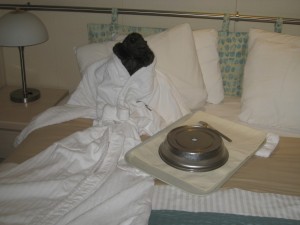 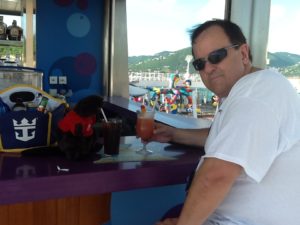 With the Kow at the bar 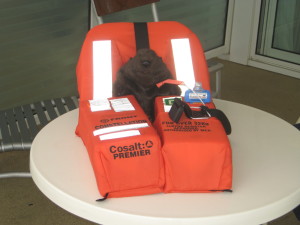 Don’t we all love this drill? 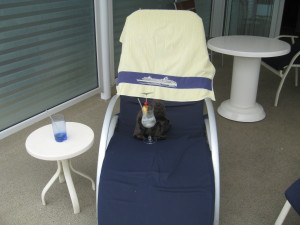 On the Balcony of our Family Stateroom