THE LURE OF THE LORELEI

The story of Lorelei is a romantic tale authored by Clemens Brentano at the beginning of the nineteenth century which evolved into or became blended with another story of a woman made famous in a poem of the same name later in the century by H.Heine. Was the tale based on a legend or did it appear just a few hundred years ago in the imagination of these two men?

Brentano’s Lorelei was accused of bewitching men to their death. On the way to her banishment in a nunnery, she leapt to her own death from the rocks above the river Rhine. The subsequent poem by Heine transforms Lorelei into a siren who, similar to tales of mermaids who lure sailors to their death by sitting on rocks by the sea whilst combing their long beautiful hair and singing a haunting song, lured vessels to their destruction in this section of the Rhine River.

Some part of the tale is based on fact : the Rhine at this point on its journey to the North Sea is very deep and extremely narrow. It is near the bend in the river close by the towns of St. Goar and St. Goarhausen. Below the river’s surface the rocks and the subsequent current make the river a danger to both boats and men. Many shipwrecks have occurred here over the centuries. The name of Lorelei, or Loreley as it sometimes is spelled, appears to have been derived from the old German and Celtic words meaning “murmur of rocks”. There was once a distinct sound made by the flow of the fast flowing water over the rocks which was echoed back from the rocky cliff above .This sound was noted before the area was transformed by the intrusion of modern day noise. Today you would be hard pressed to hear this siren song .

Lorelei, as the distinctive rocky cliffside in the bend of the Rhine is now named, is a great tourist attraction. It is most often pointed out and the tale recounted on the many river cruises which sail the UNESCO World Heritage site of the Rhine River Gorge with its density of fairy tale castles, vineyards, and quaint towns. The cliff rises over four hundred feet above the river. A large statue to Lorelei has been erected which can be reached on foot from the nearby town of St. Goarhausen, a long and rugged path that is not particularly pedestrian friendly but which rewards one with a spectacular view of the river, surrounding towns, near by Castle Katz, and vineyards.

Indeed looking around from the Lorelei, it is easy to believe in the fairy tales of old.

You can see the Lorelei and hear the tale on a European Rhine River cruise. Let your river cruise professional find you the perfect itinerary on a river cruise line that suits your taste and budget.

Statue of the Lorelei 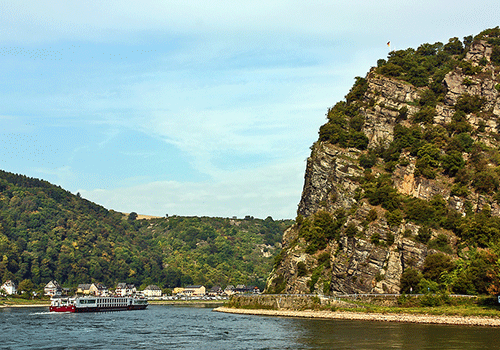 Bend on the Rhine & Cliff with Lorelei at Top 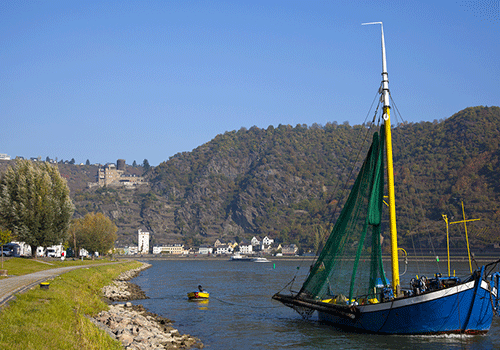 All images courtesy of  Bigstock .